This is a set of four notelets, made using the Taylored Expressions Sew Happy Stamp Set. 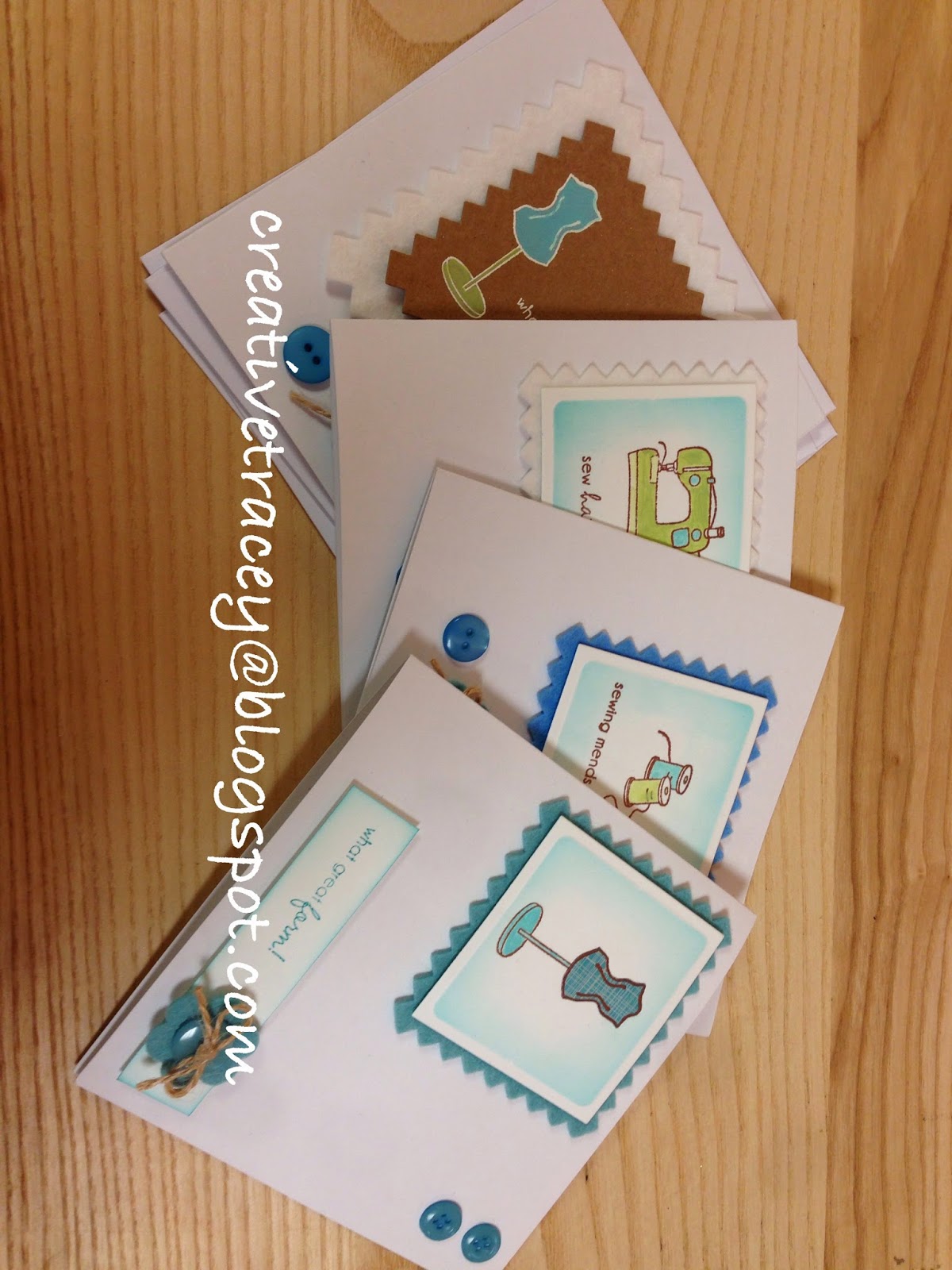 The notelets are all made with a small square white card and then decorated using a similar theme. 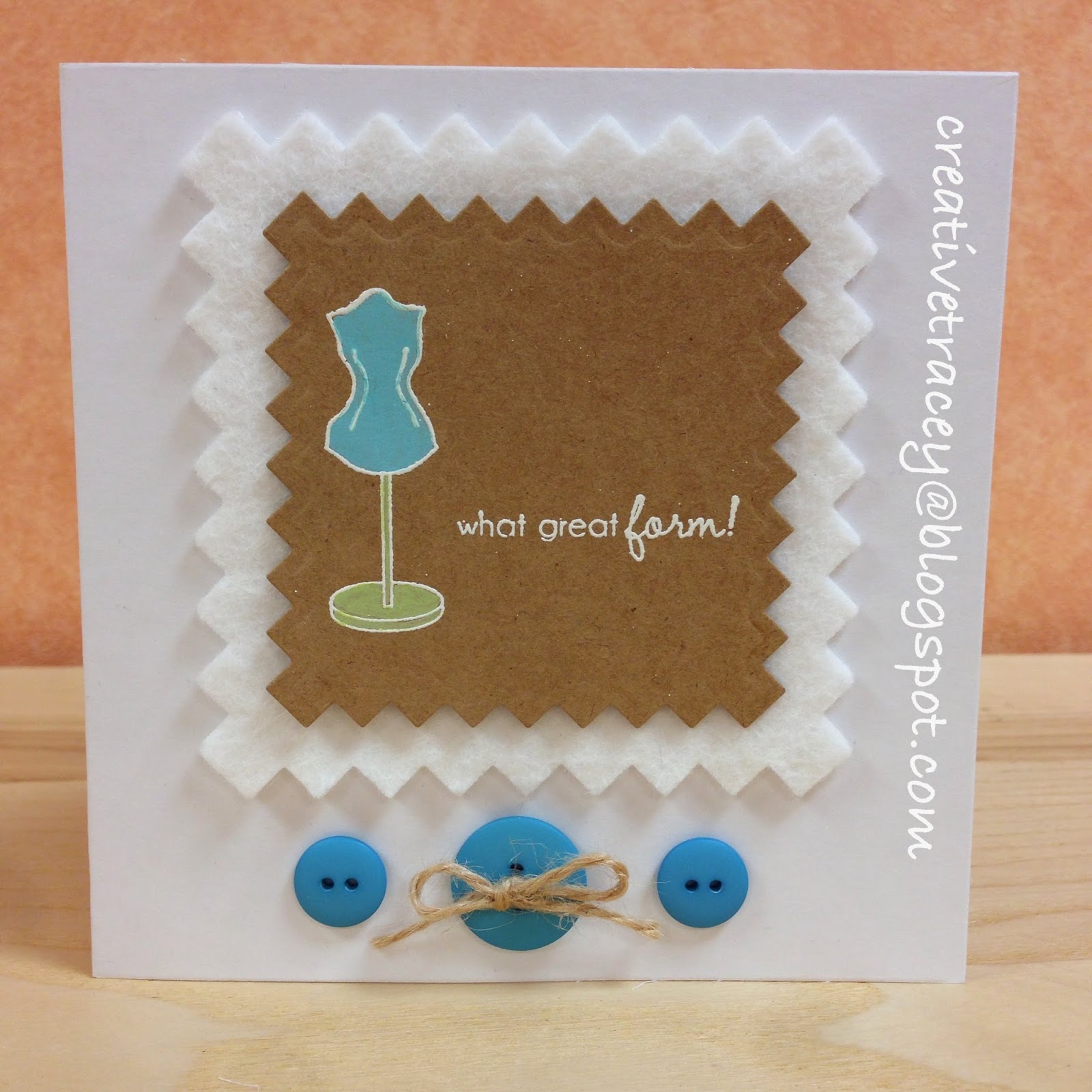 This one has a piece of white felt and a piece of kraft card, both die cut using the Spellbinders Swatches die set, but you could use pinking shears. The stamped image comes from the Taylored Expressions Sew Happy stamp set and has been stamped with clear Perfect Medium and then heat embossed using Cosmic Shimmer Ivory embossing powder. The image has been coloured in using the Cosmic Shimmer Matt Chalk Paints. 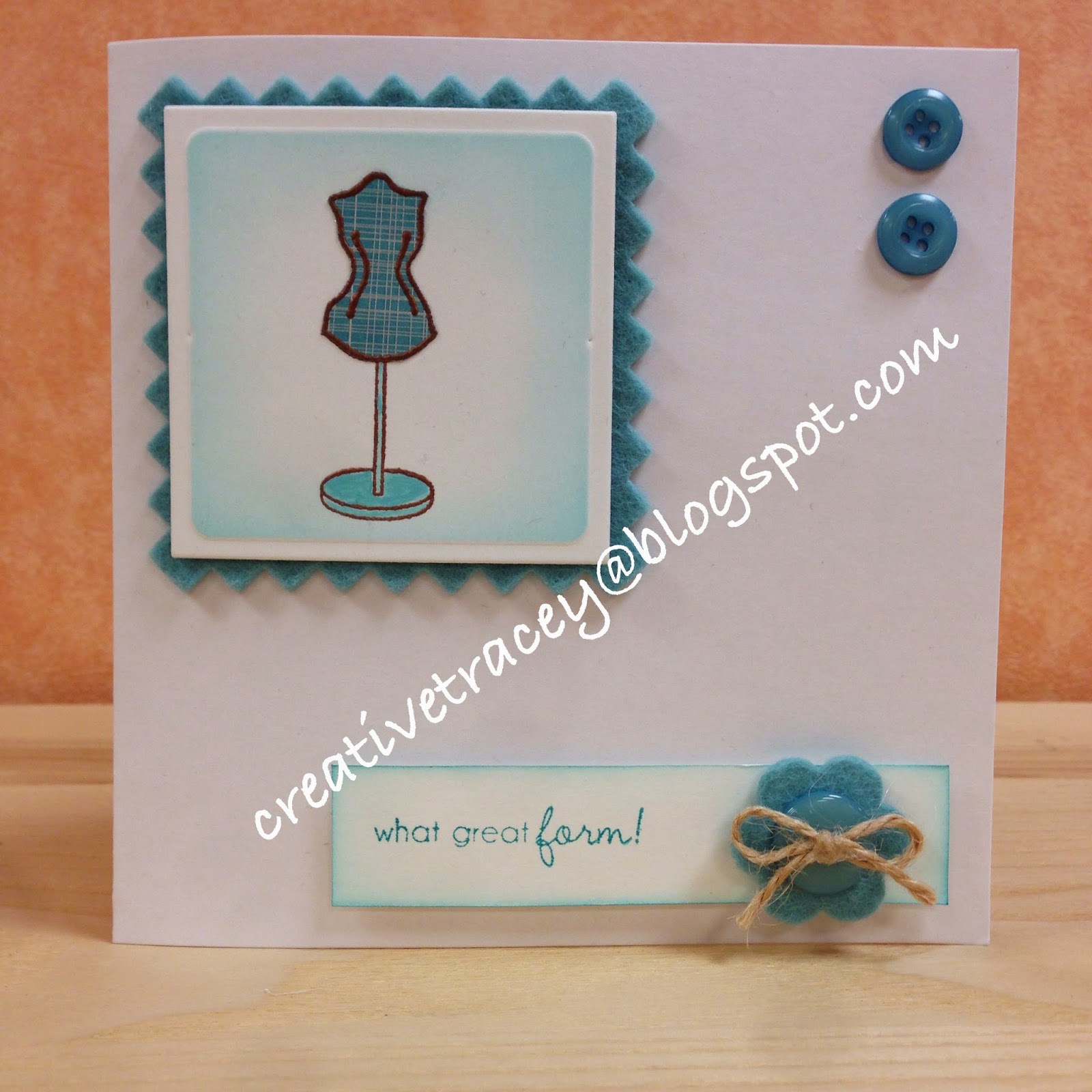 This time a teal felt swatch has been die cut. The dress form stamp has been stamped a second time onto a piece of co-ordinating paper and then layered up on the top part of the dress form. The base has been coloured in using the Cosmic Shimmer Matt Chalk Paints. The ink used around the two white card pieces is Peacock Feathers Distress Ink. 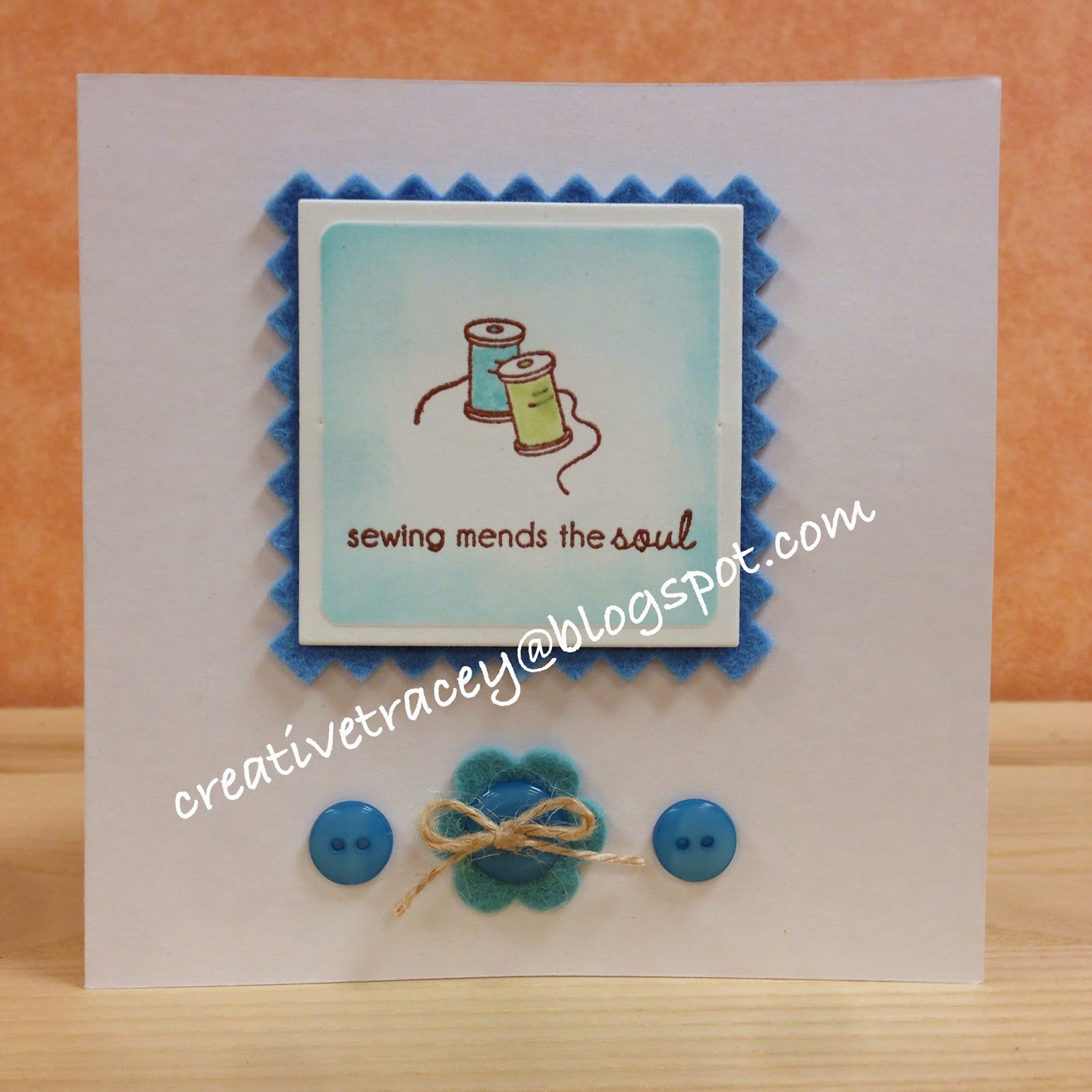 For the third notelet I used the blue felt from the Blossom Felt Pack by Creative Expressions. 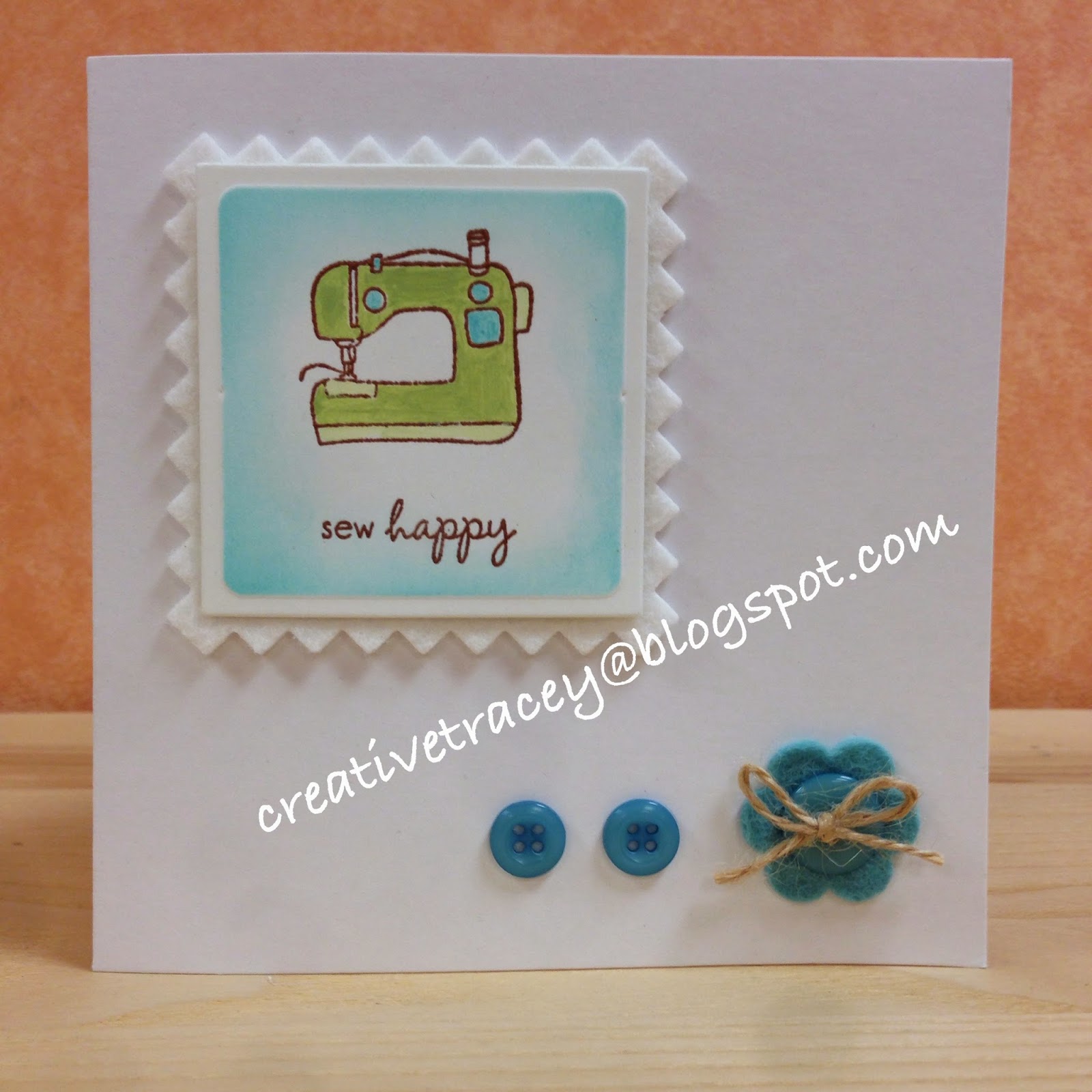 This card was made from a piece of A4 coconut white card, which I embossed using the Couture Creations Hemlines embossing folder, extending the design as required. 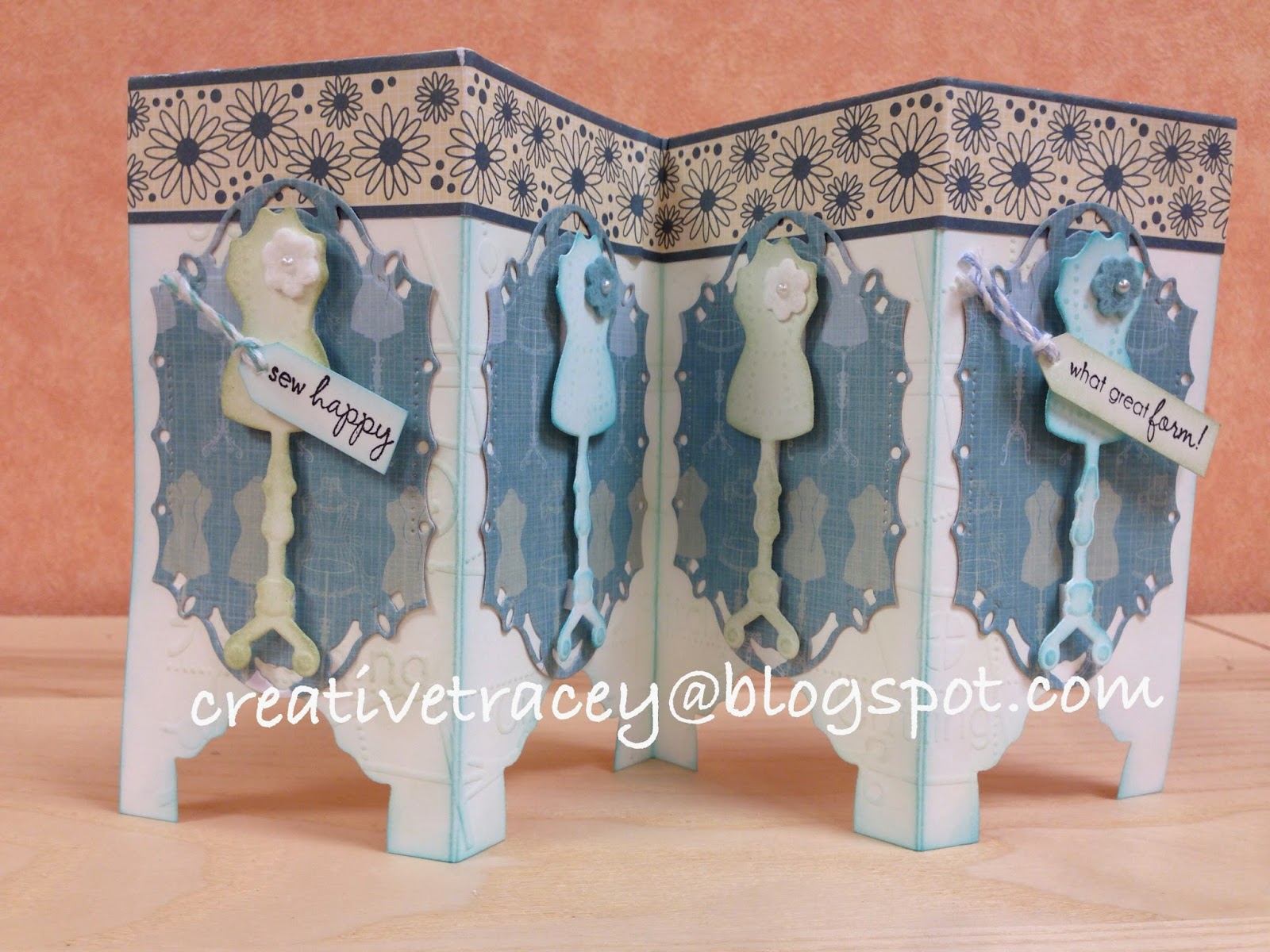 I then scored and folded the card into quarters along the long edge, to form the screen panels. The floral border along the top edge was cut from the Couture Creations Sew Jo paper pad. Four co-ordinating panels were then die cut from the same paper pad.

To shape the bottom of the screen, a labels shaped die was used to cut a small portion out of each panel. 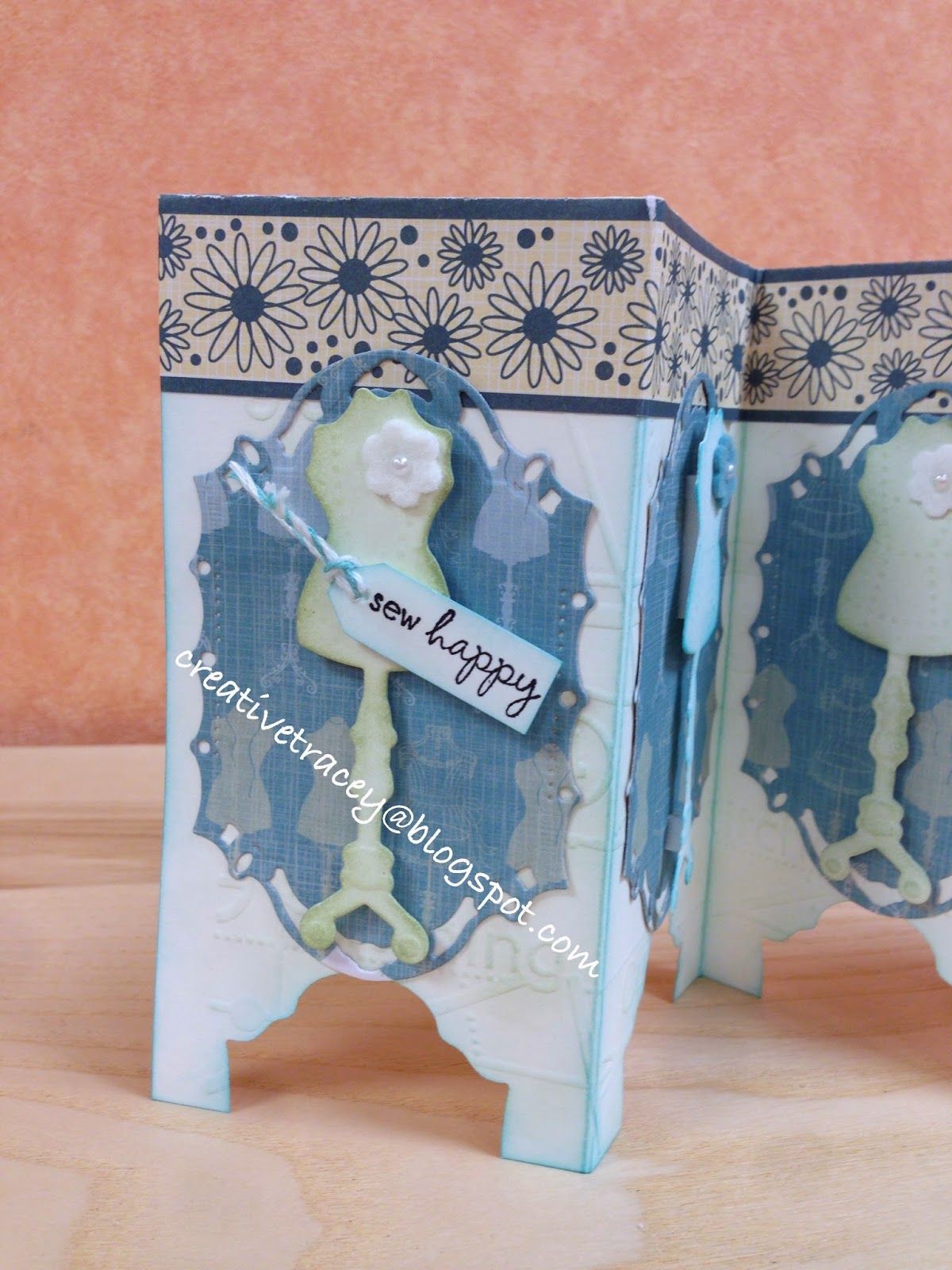 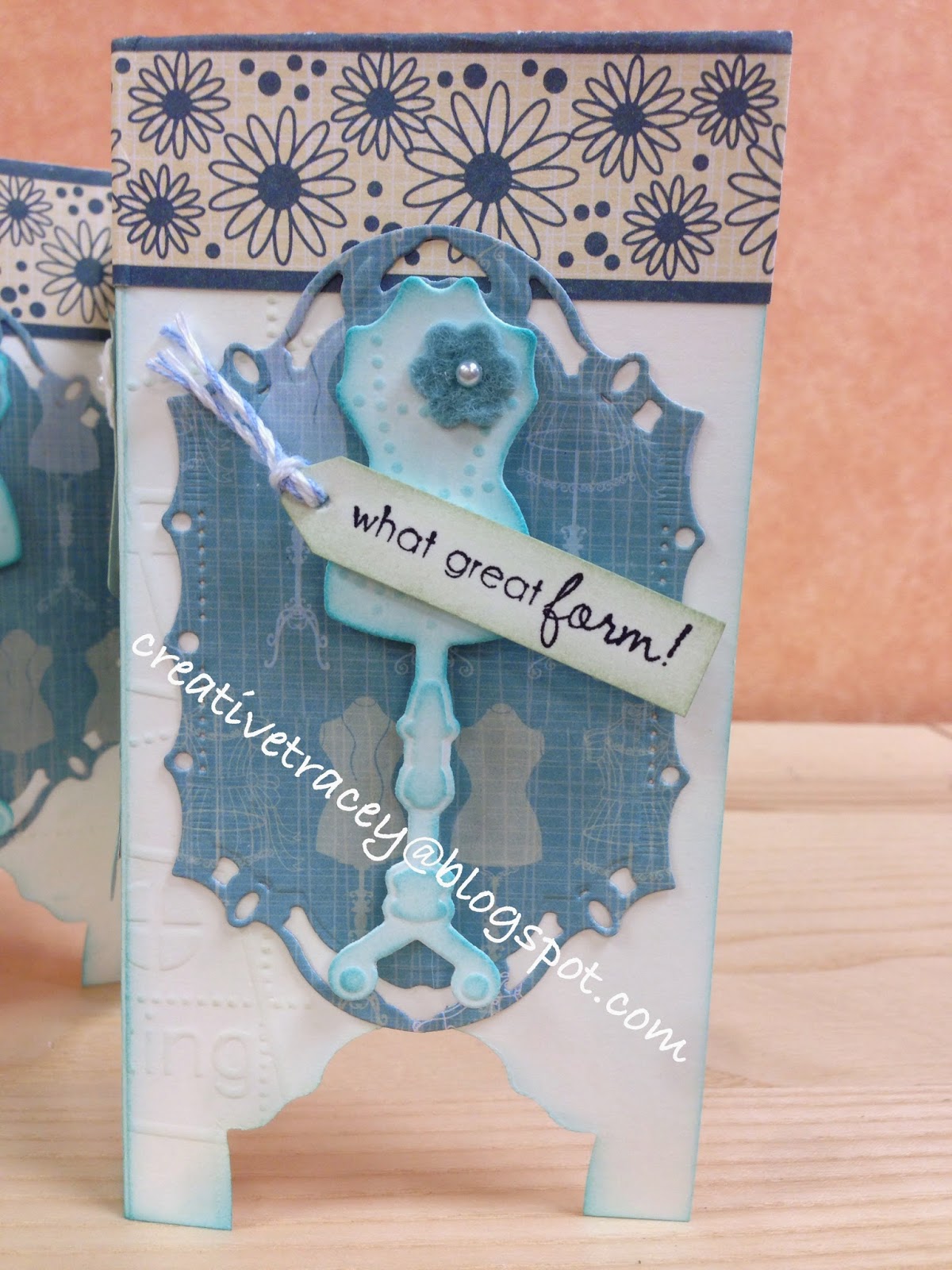 I really enjoyed making this sign from a Pronty MDF Plaque. 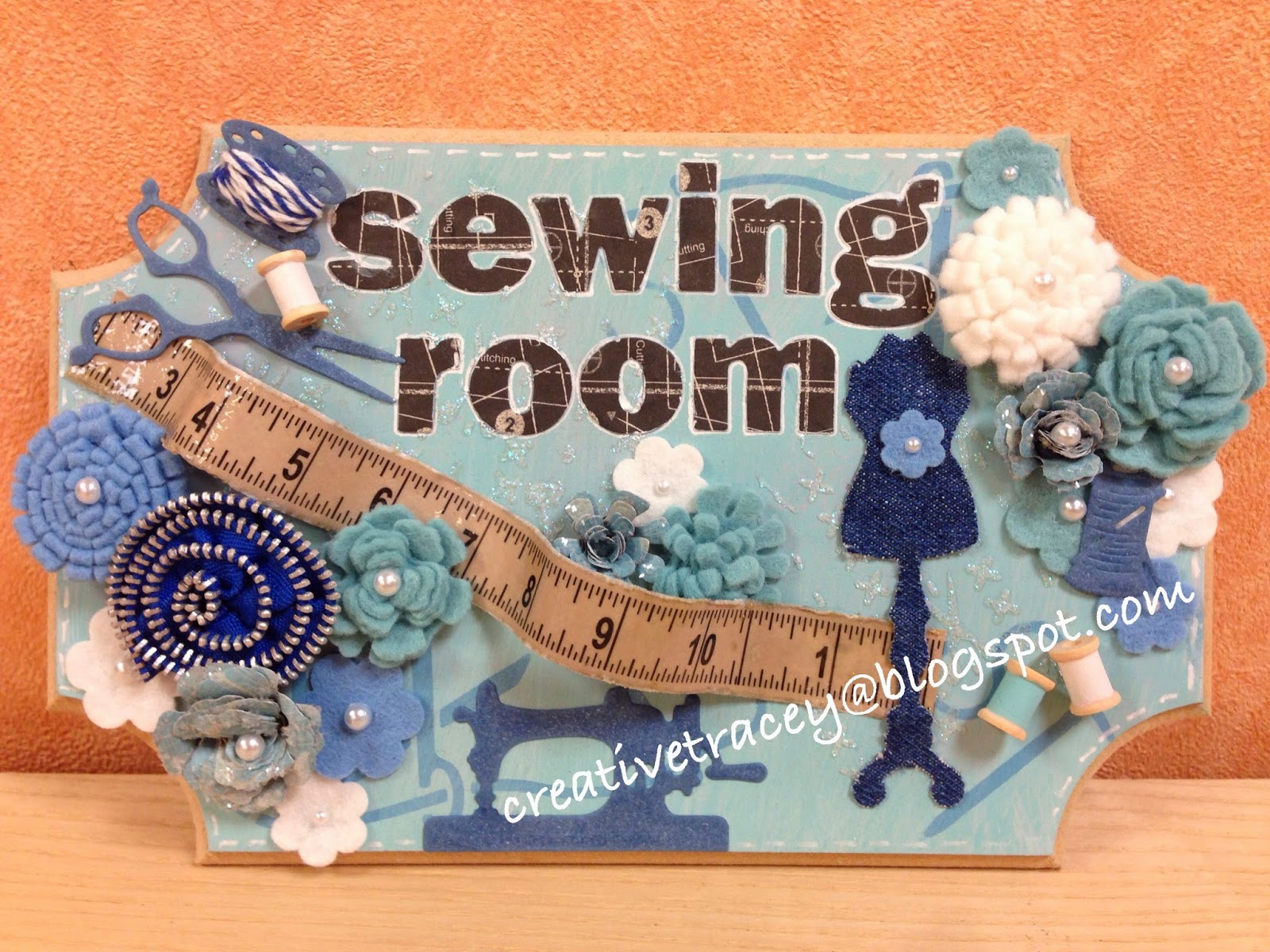 I painted the plaque using Cosmic Shimmer Matt Chalk Paints, sponging on a few different shades (Warm White, Shy Violet and Shallow Sea). Once dry, I used the Creative Expressions All Sewn Up Mask with some Cosmic Shimmer Aurora Sparkle Texture Paste in small sections over the MDF. Whilst this was drying I die cut the letters to read sewing room from one of the patterned papers in the Couture Creations Sew Jo Paper Pad. I also used the That Special Touch Just Sew Mask with a Faded Jeans Distress Ink Pad, randomnly around the plaque. 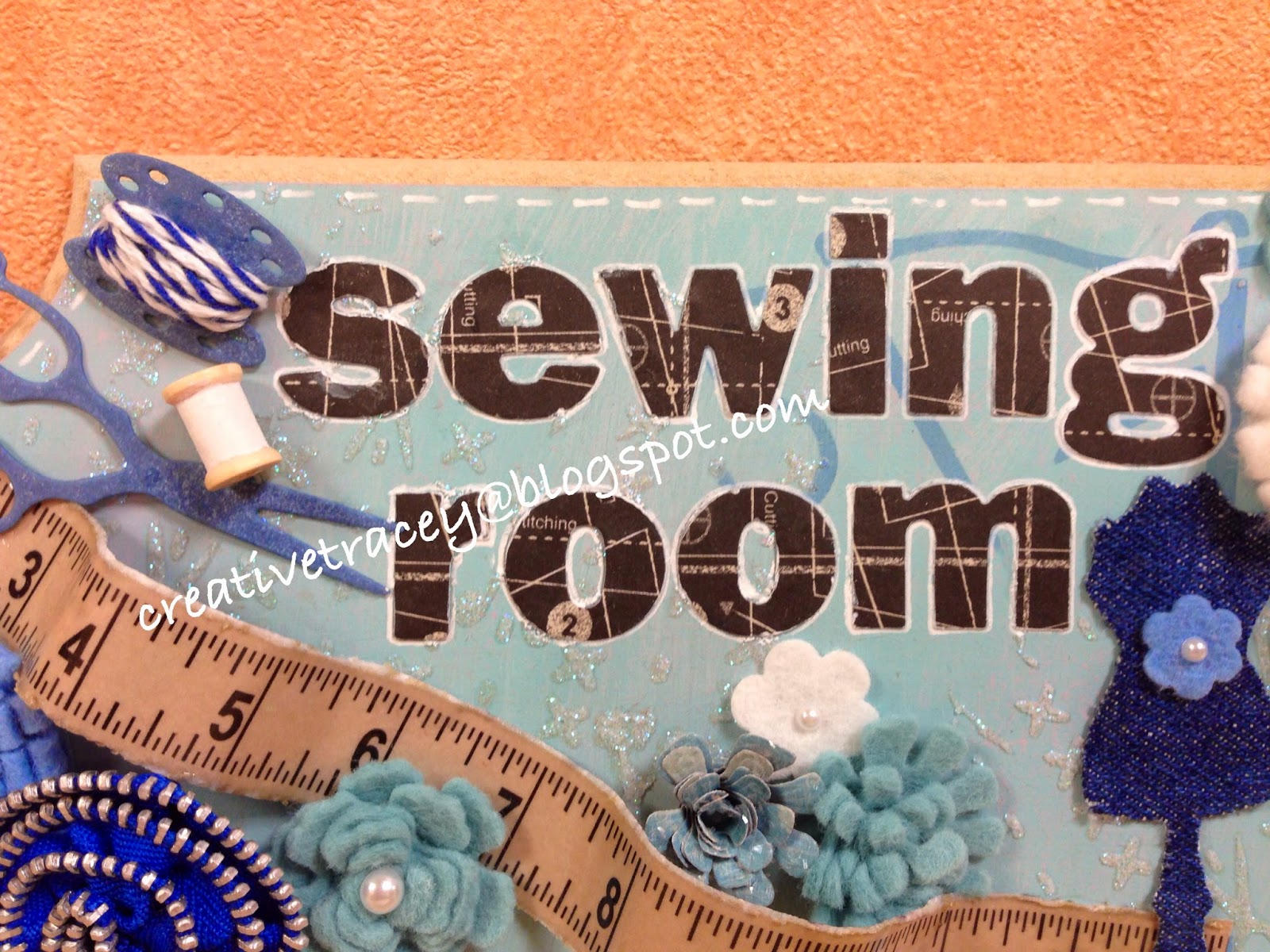 Once I had attached the words, I outlined each letter with a white pen. I also used this white pen to add a line of faux stitching around the outside edge of the plaque. 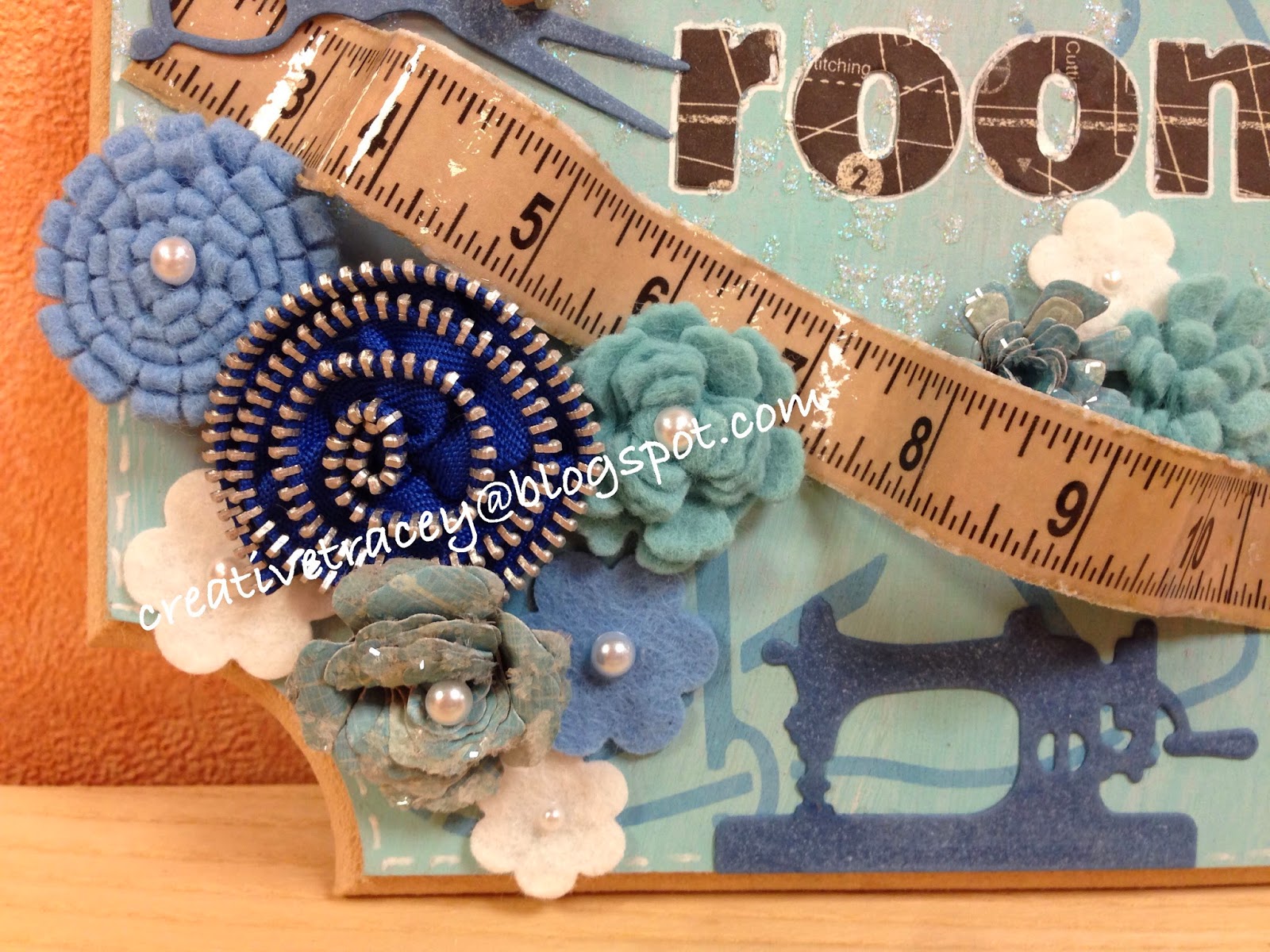 I then had lots of fun making an assortment of embellishments to add to the plaque. I die cut the scissors, bobbin and spool (from the Sewing Kit die by Couture Creations) and sewing machine from the Couture Creations Sewing Machine die. I then coloured the white card die cuts using the Faded Jeans Distress Ink pad.  I die cut flowers using the Blossom Felt Pack from Creative Expressions and some of the Sew Jo paper pad. The dies used were the Classic Rose die set by Sue Wilson and the Bitty Blossoms die set by Spellbinders. A couple of the flowers were made with the felt, by just rolling a strip of felt which had been snipped all along one edge. 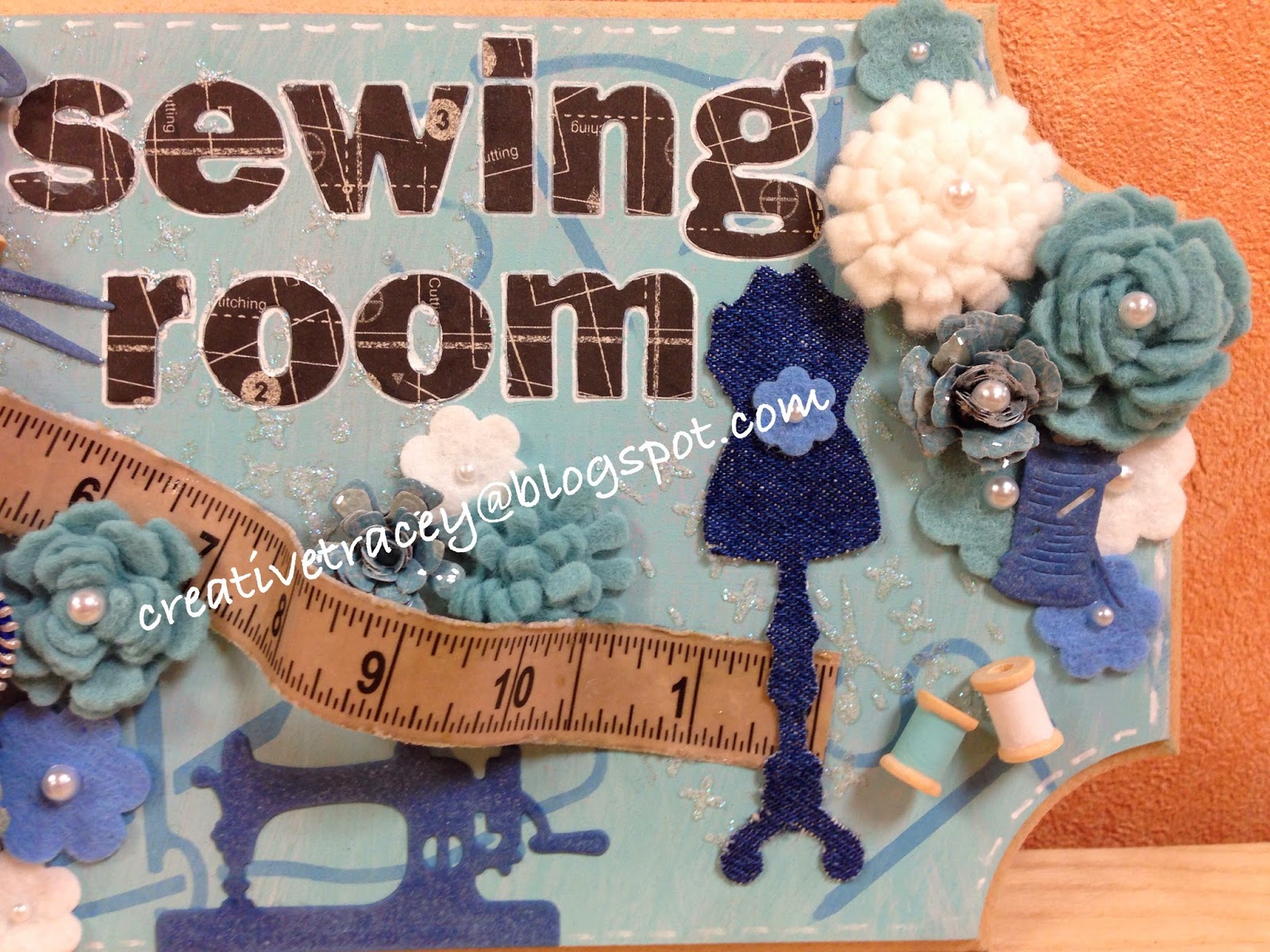 I also die cut the Dress Form from a piece of denim material, using the Couture Creations Dress Form die. The tape measure was cut from one of the pages in the Sew Jo Paper Pad. I added Perfect Medium and heat embossed with Cosmic Shimmer clear embossing powder. I then shaped the tape using my fingers. 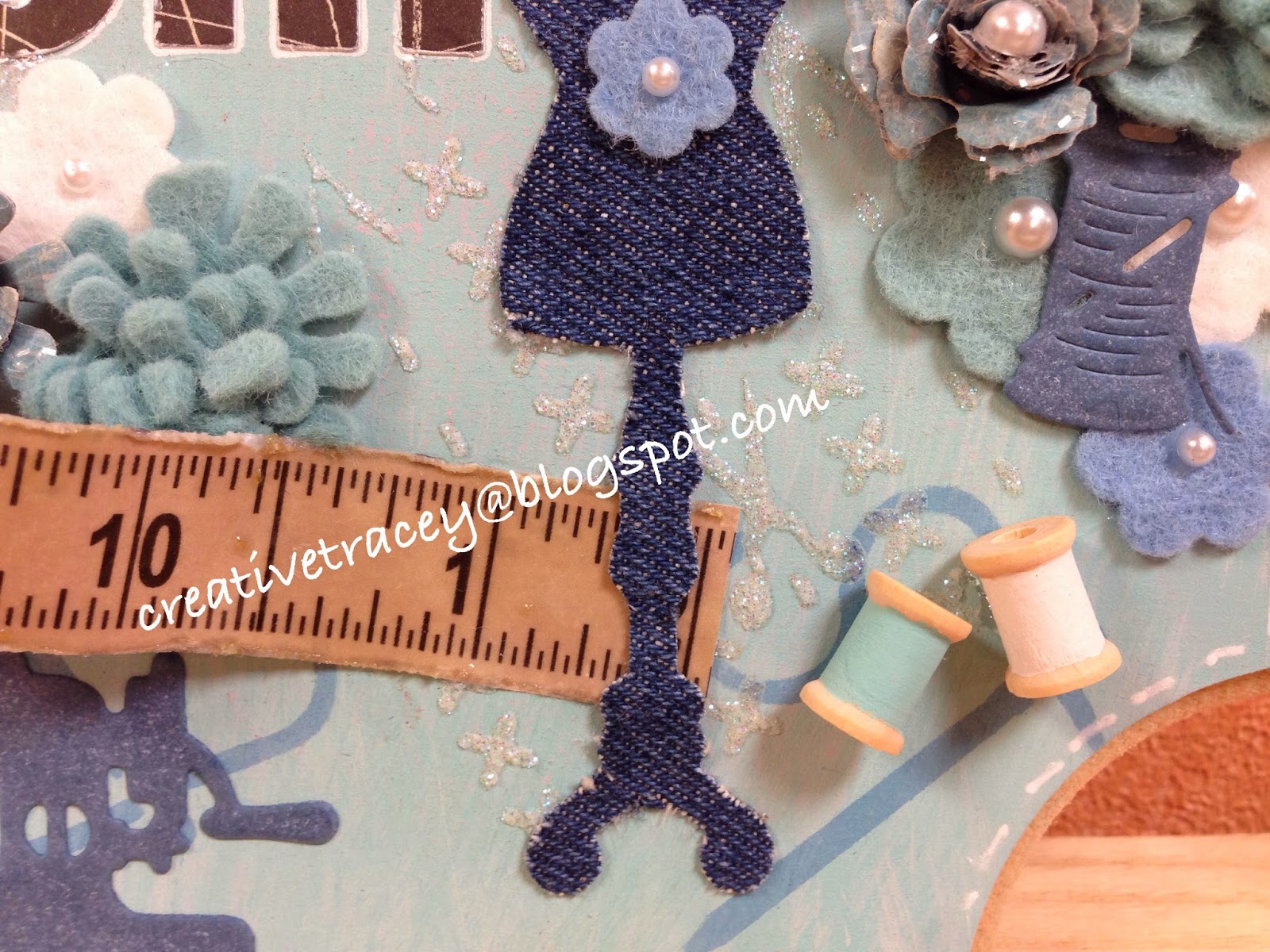 I added a bit of bling with some glitter jewels on a few of the paper flowers and a few self adhesive flat back pearls. I also added a few mini spools, which had been painted using the Cosmic Shimmer Matt Chalk Paints.

For me, this card is all about the sparkly background! I started with a piece of coconut white card, which I embossed using the Couture Creations Buttons Galore embossing folder. I then blended Peacock Feathers and Faded Jeans Distress Ink over the whole area. Once this was dry, I added a piece of double sided adhesive sheet and then poured on some Cosmic Shimmer Glacier Ice Glitter Jewels. 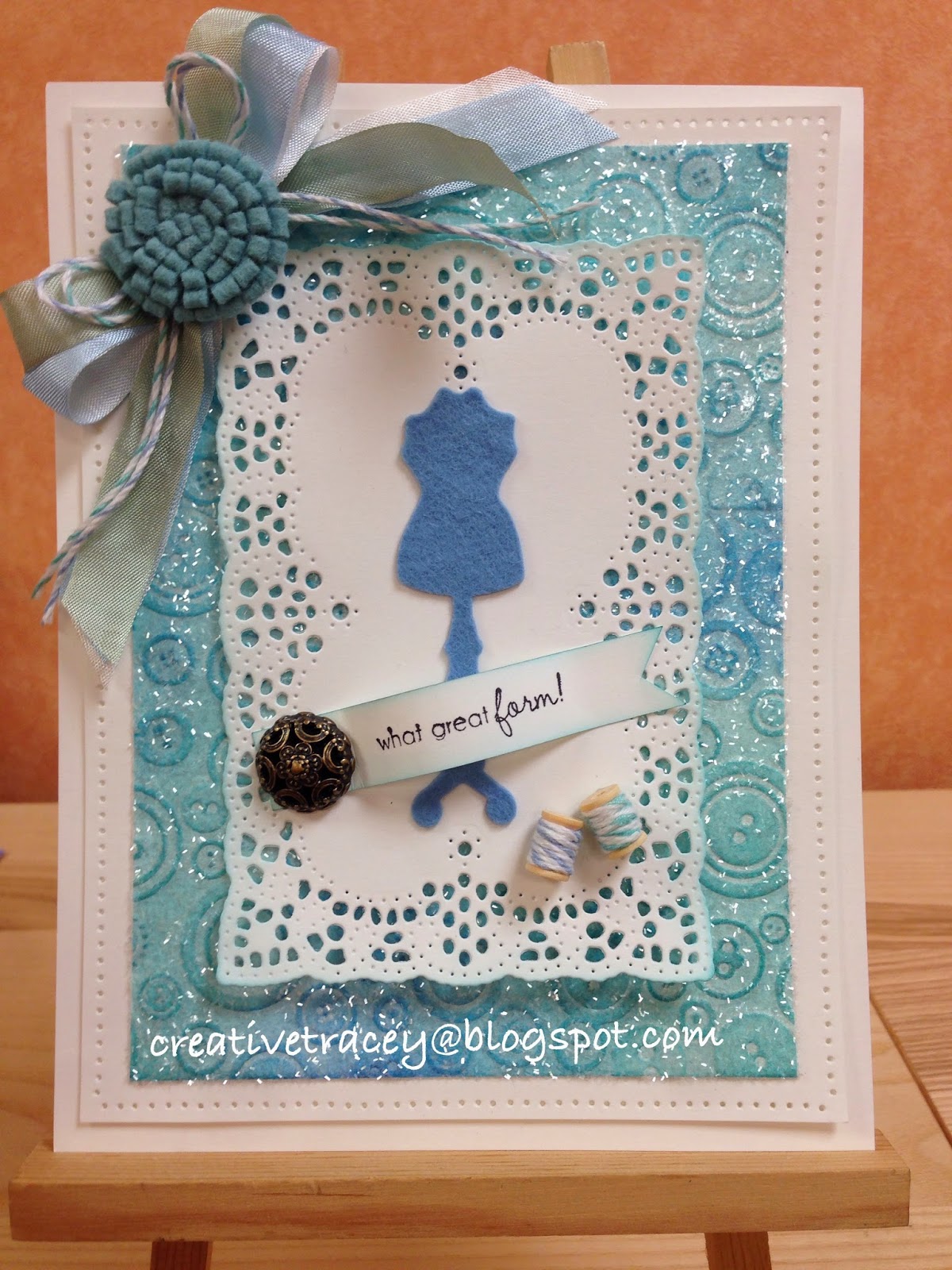 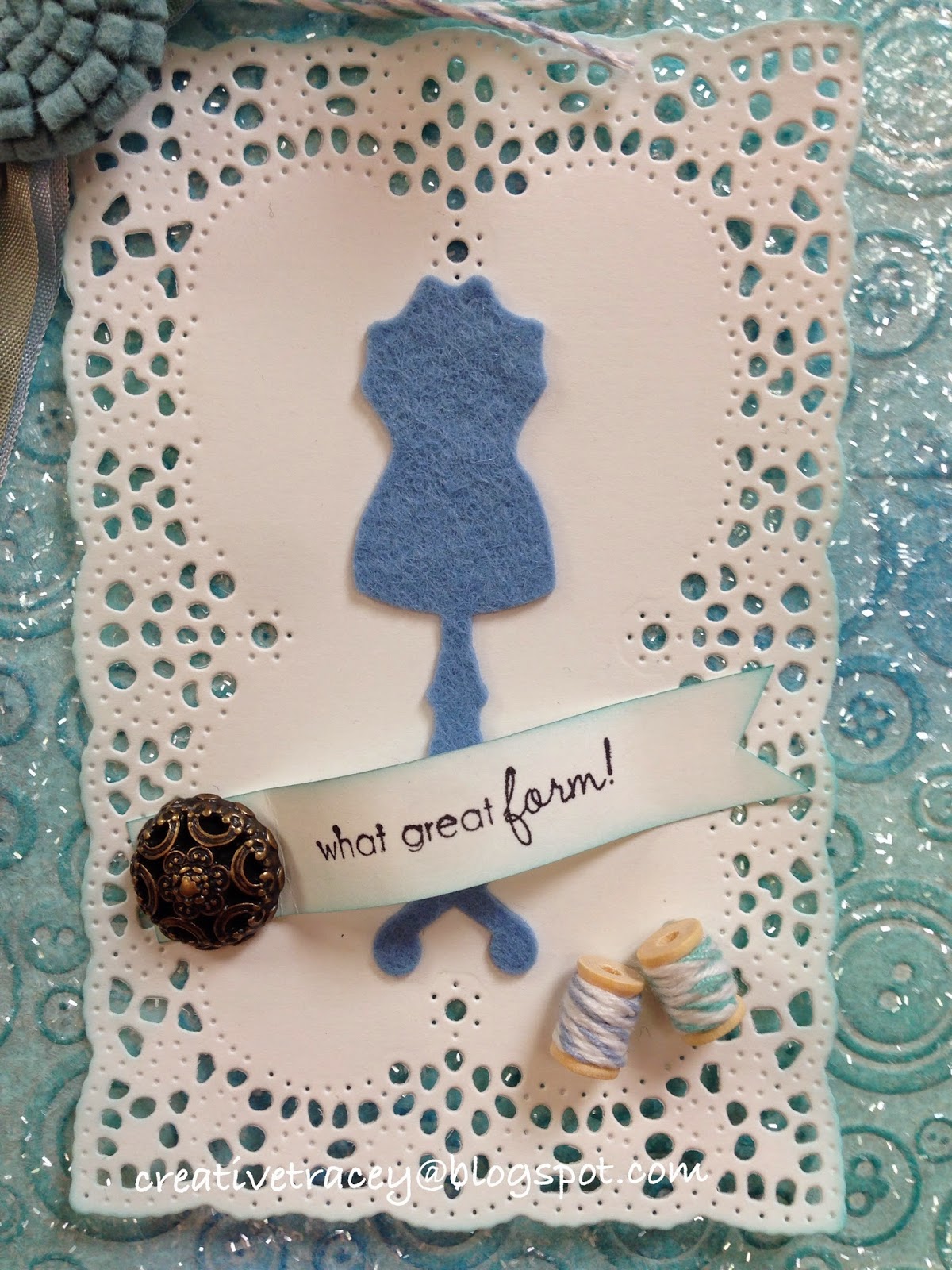 The sentiment comes from the Taylored Expressions Sew Happy stamp set. A vintage button and a couple of mini spools were then added. The spools had been wrapped with Bakers Twine from the pastel pack by Creative Expressions. 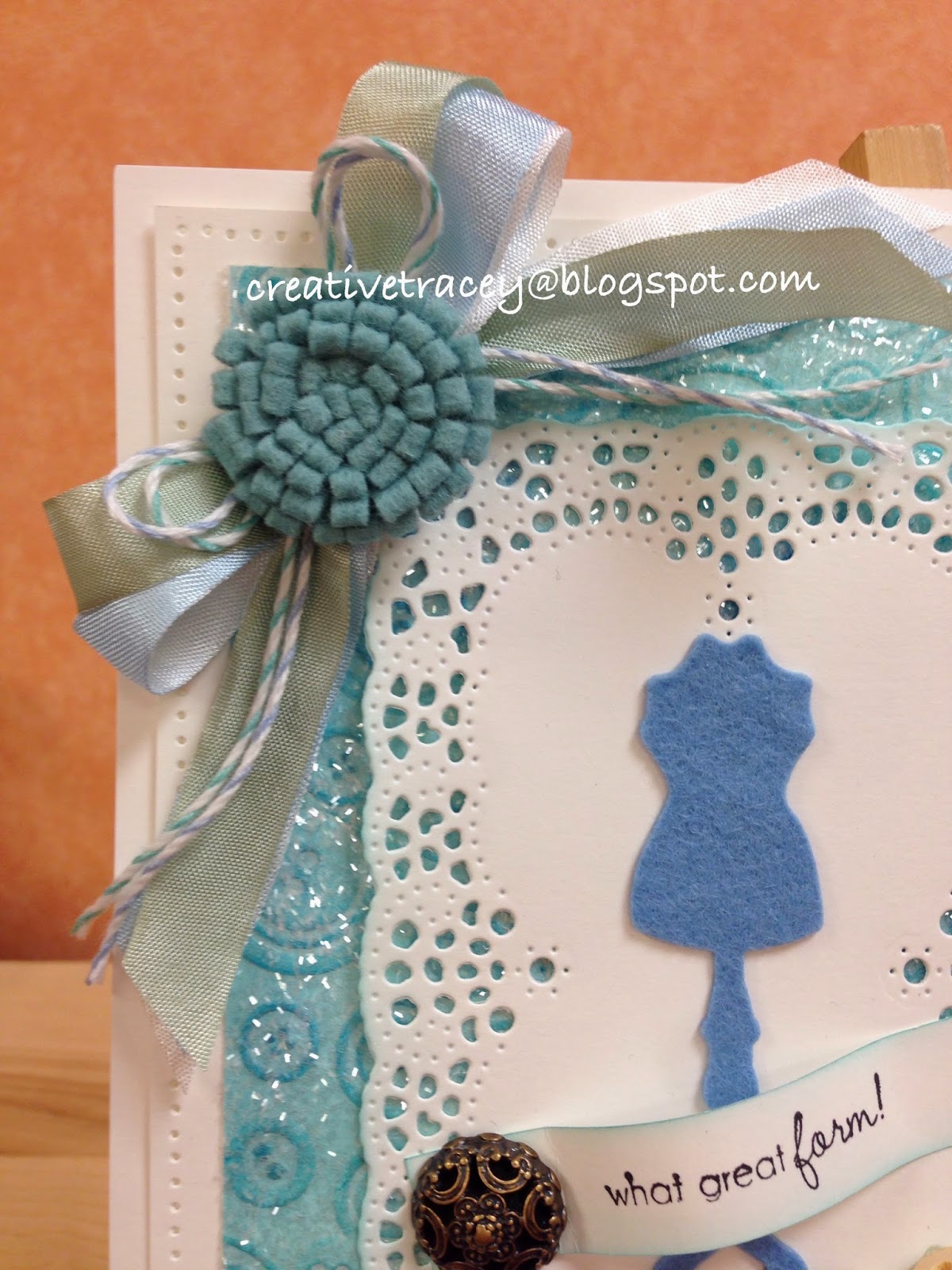 The bow was made using two shades of Seam Binding Ribbon, two shades of Pastel Bakers Twine and a felt flower made by rolling a piece of felt. 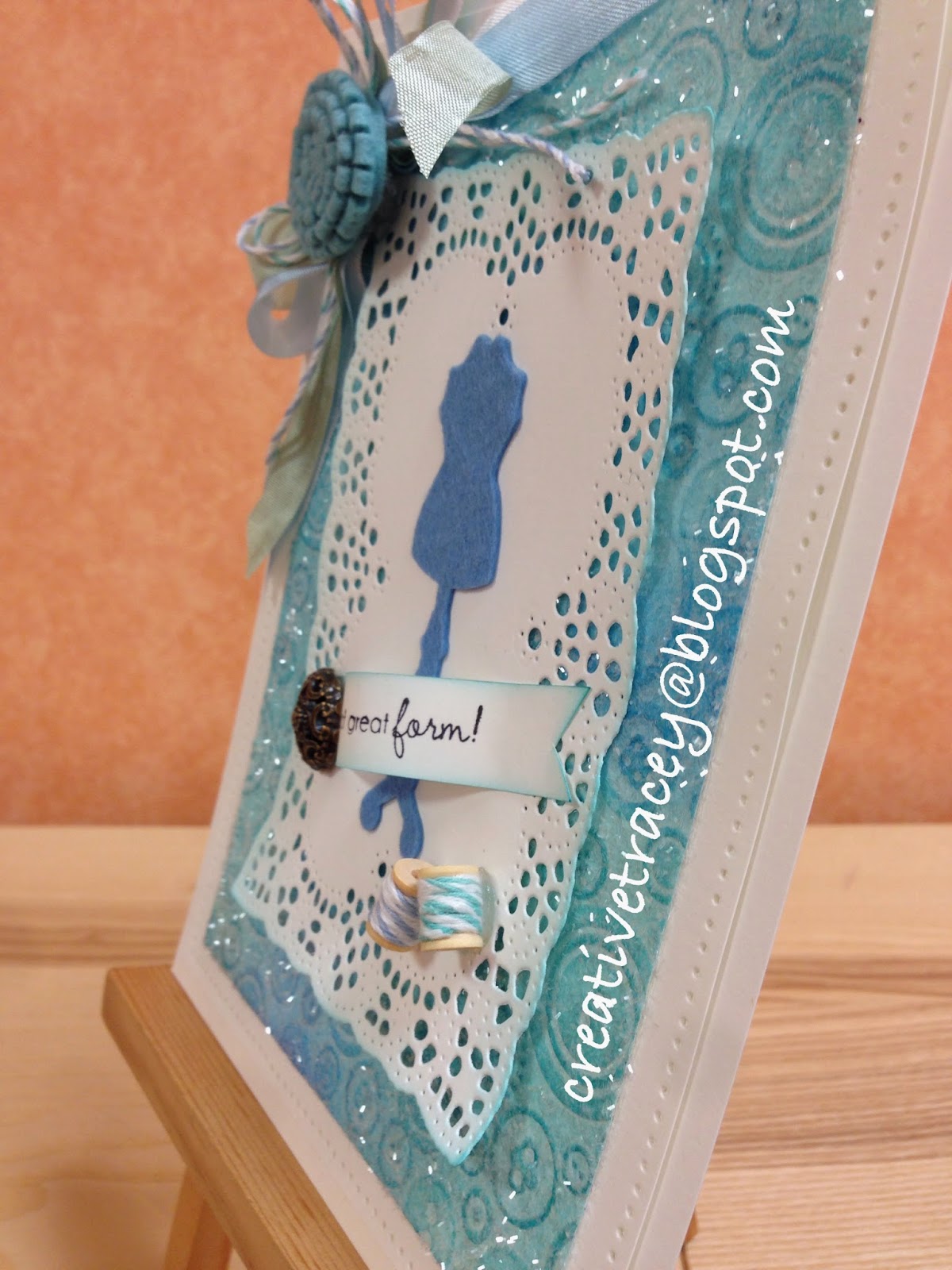 Very proud to be a member of: 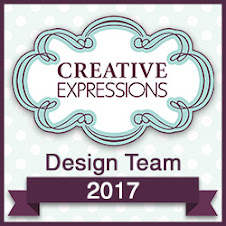